With COVID-19’s daily new cases remaining at relatively high levels across the globe, the stay-at-home economy is expected to remain strong, as various restrictions both in terms of the working environment and recreational activities should persist.

I am currently residing in Greece. A few days ago, the Prime Minister announced that despite the country being one the least affected/best managed across Europe, several restrictions should continue to apply. For example, all restaurants/bars are to remain closed past midnight. In fact, getting outside between midnight and 6 a.m. is to be prohibited, unless special circumstances apply. Other measures include obligatory usage of masks at all public places, at all times.

Each government, of course, undertakes different policies. However, as long as the virus remains in force, we believe that companies operating in the staying-at-home economy will continue flourishing.

One such company to benefit is Electronic Arts (EA), as video games have largely subsidized a large part of the entertainment previously done outside. In our Wheel of Fortune marketplace service, we have been bullish on EA’s stock since the beginning of the year. Despite shares undergoing a decent rally during this time, we believe that EA’s investment case remains quite attractive, featuring a decent valuation and a robust generation of free cash flow.

In this article, we will:

Electronic Arts has been an industry leader for a long time. The company has an extended catalog of releases over the years, bringing to life some of the most iconic franchises in gaming.

By operating in a growth sector while owning the rights to some of the best-selling sports titles and brands, the company has been growing its sales consistently. Powered by its successful franchises such as FIFA, Madden, UFC, Star Wars, as well as numerous individual titles, EA operates a diversified portfolio of brands, each appealing to different audiences, offering multiple sources of cash flows.

This allows the company to release its games at a spread-out timeframe, not only for not competing with each own sales but also for enjoying consistent revenues. The gaming sector is subject to seasonalities, which EA has managed to mitigate. Finally, economies of scale work perfectly for video games, so its profitability is highly scalable. A studio has the same costs, whether a few thousand or a few million buy a game. As the company’s player base has been expanding over the years, with higher revenues, EA has been heavily extending its gross margins, currently sitting at an impressive 74.5%. Higher margins are also the result of retail sales shifting to digital, avoiding the in-between costs. 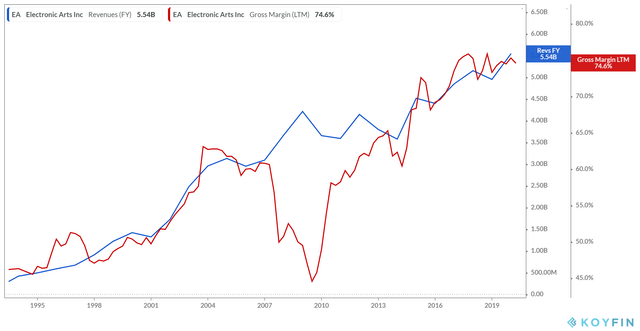 As a result of a consistent release cycle, increasing demand/sales for its games, and expanding margins, EA’s profitability has grown dramatically over the past decade, with net income margins that many companies would be envious of. 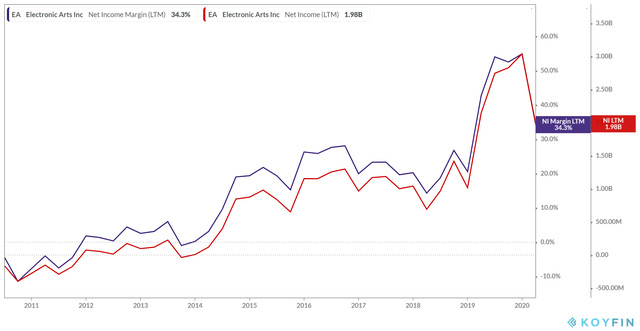 As we mentioned, EA is able to scale its existing titles while retaining a constant and relatively low CAPEX. As a result, the majority of its cash from operations ends up being free cash flow. Being a non-capital-intensive business, management is able to take advantage of the company’s enormous free cash flow generation to grow a healthy balance sheet while also returning a significant portion to stockholders. 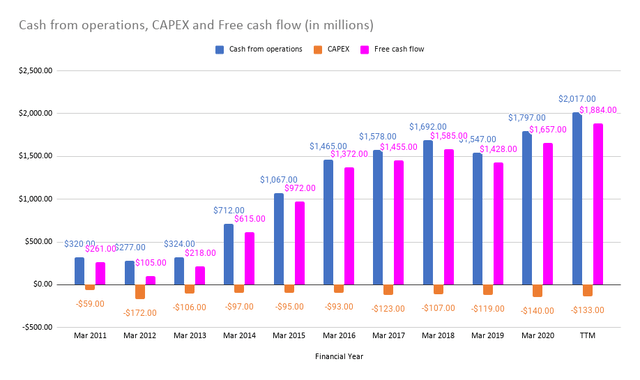 Management has been utilizing this cash in two ways:

As the graph displays, EA’s shares outstanding have been diminishing over the past few years. In the last four quarters, management allocated more than $1B in stock buybacks, resulting in retiring around 3% of the company’s shares. Prolonged repurchases are also boosting the company’s EPS. 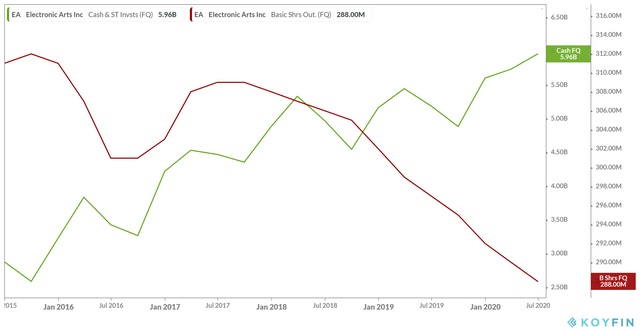 In addition, by continuously reserving the rest of the cash generated, EA has been growing its cash position to nearly $6B. This is a huge cash position for the size of the company. At an enterprise value of around $33B, nearly 20% of the company’s EV is cash. We often praise companies like Facebook (FB), Google (GOOG)(GOOG), and Apple (AAPL), for their enormous cash positions. While we are not trying to make any comparison, for context alone, their cash to enterprise value is 8.9%, 14%, and 4.7%, respectively.

Therefore, we believe that the company holds an adequate war chest to complete any potential acquisitions and further expand its portfolio of games. This is a particularly special time to keep sufficient liquidity, as the upcoming releases of the new PlayStation and Xbox could boost consolidation in the sector. Just recently, Microsoft acquired ZeniMax Media and its game publisher Bethesda Softworks for $7.5B, all in cash. In any case, EA’s cash position should make for a healthy balance sheet, providing a comfortable cushion for future ventures.

Free cash flow is a great metric to embed in estimating investor returns, as it’s what’s left for investors to enjoy after all operating costs and CAPEX have been set. But first, let’s discount EA’s free cash flow in order to assess whether shares are fairly valued. In an ultra-low rates environment, discounting cash flows may be a bit tricky; still, it makes for an insightful valuation method.

Initially, we are plugging in all the necessary numbers, with a risk-free rate of 0.66%, equal to the current 10-year T-bill rate. 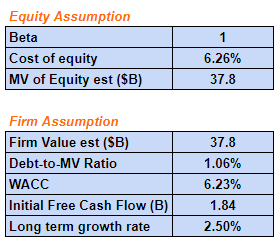 Then, we are estimating a long-term growth rate of 2.5%, which is quite reasonable. Further, let’s suppose that EA’s free cash flow generation doesn’t see any growth in the medium term, staying stagnant.

Despite free cash flow seeing no growth over the next few years (except for the 2.5% terminal rate), we are getting an estimated intrinsic value of around $192/share. This suggests that the company is undervalued by around 46% at its current price levels. 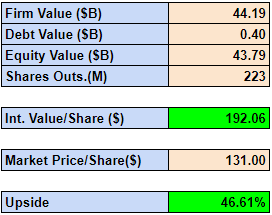 The company’s shares coming out as heavily undervalued is hardly a surprise. Despite its robust profitability, EA’s shares have never really traded beyond a P/E of 30, with its current forward ratio at around 27.3. This also goes back to the fact that EA can retire a decent amount of shares, with limited funds, since shares have never been “expensive.” 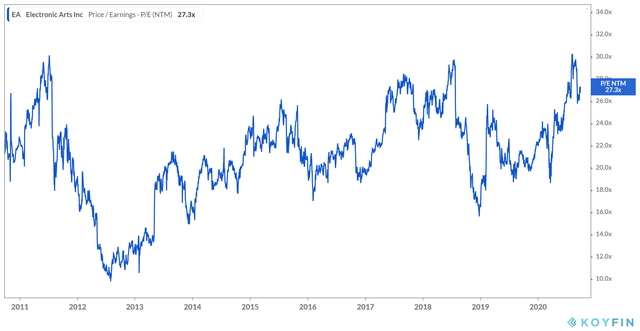 Therefore, we believe that EA will continue having stock repurchases as the primary method of returning capital to shareholders.

To project the future investor returns, we are estimating an EPS CAGR (compound annual growth rate) of 7% over the next few years. This is very prudent, in our view, since stock buybacks alone contribute greatly to the company’s EPS growth. Keep in mind that EA’s past 5-year EPS CAGR is around 17.7%. Hence we assume a significant slowdown in its per-share profitability growth.

Future EPS figures are likely to look like the following, based on this growth rate: 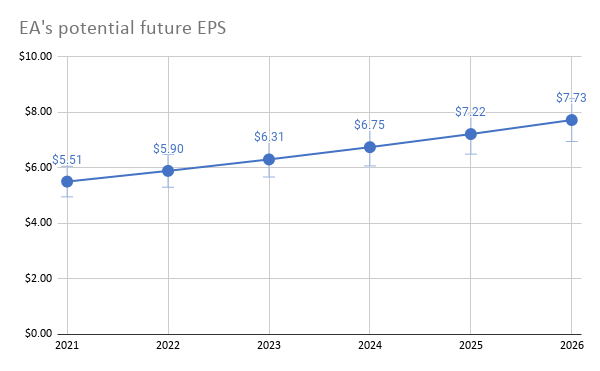 Plugging in EA’s current stock price, our expected EPS growth rate, and different potential valuation multiples, we get the following expected CAGR returns. At a reasonable valuation range of around 27 to 33 times the company’s EPS, we are projecting annualized returns of around 9.7% to 14.2% in the medium term. 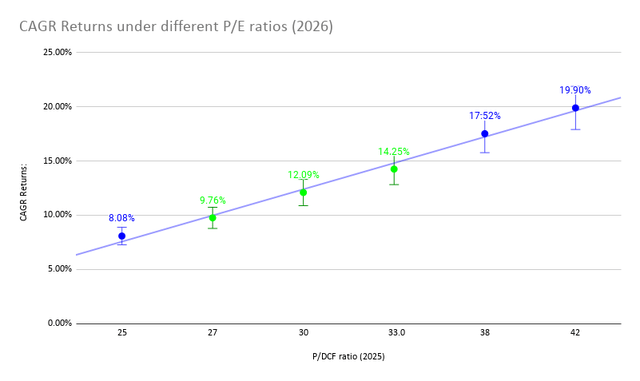 At the same time, there are some risks to be aware of. We consider two of those to be quite significant:

Taking everything into account, we believe that Electronic Arts remains an attractive investment opportunity, offering a juicy future return potential at a discount. We therefore remain quite bullish on the stock and excited about the company’s overall future in a rapidly growing sector. At the same, investors should stay aware of the underlying risks.

Wheel of FORTUNE is a one-stop-shop, covering all asset-classes (common stocks, preferred shares, bonds, options, commodities, ETFs, and CEFs), across all sectors/industries, through single trading-ideas and model-managed portfolios.

The extremely-wide scope of the service allows us to cater all types (of investors) and (investment) needs/goals, making WoF a true one-service-fits-all.

Our offering includes, but isn’t excluded to, the following:

Disclosure: I am/we are long EA. I wrote this article myself, and it expresses my own opinions. I am not receiving compensation for it (other than from Seeking Alpha). I have no business relationship with any company whose stock is mentioned in this article. 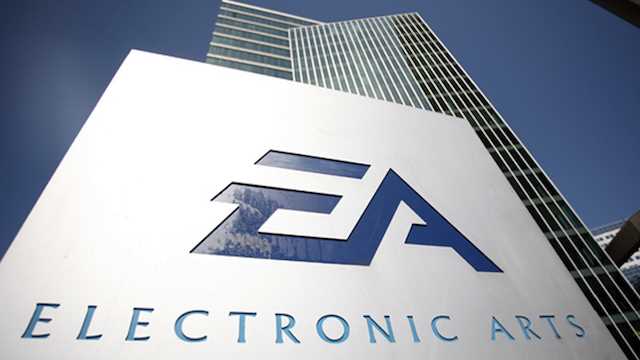 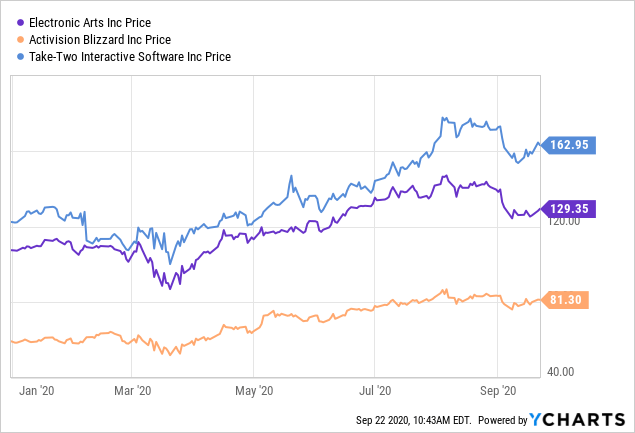